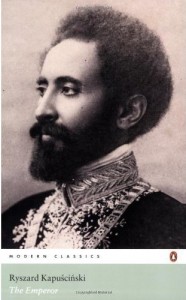 The Emperor : Downfall of an Autocrat

This is a very unique book presenting a seemingly casual investigation of the last days of Haile Selassie's reign in Ethiopia. Note that this is not a history of Ethiopia or Selassie's reign, so prior knowledge on these subjects would be an advantage. Kapuscinski offers clandestine interviews with members of the Emperor's court and ministries, as they watched the slow and rather bizarre downfall of the autocrat. While non-Ethiopians often see Selassie as an enlightened visionary and Moses-like leader of his people, the reality was much different closer to home. Here we find an entrenched demagogue more concerned with preserving his power with little knowledge of the lives of his subjects. He surrounded himself with yes-men with the same self-preserving motives, and like any fading dictator he regularly purged anyone even remotely connected to independent thinkers. In one interview, a member of the court regrets sending his son to college, as the young man became infested with ideas that were not loyal to the Emperor, though they were probably accurate. Kapuscinski's anonymous subjects underhandedly point out their leader's faults while constantly heaping titles on him like "His Enlightened Majesty" or "His Benevolent Highness." This indicates the leader's cult of personality and his employees' pathological fear of losing his favor. We then see the classic fall of an out-of-touch despot, as he was ousted in one of the weirdest revolutions of all time. This unique book seems like lightweight reporting at the surface, but ultimately offers numerous lessons in power and corruption, and Selassie's story offers many parallels for autocrats around the world and throughout history.

Отзывы и обсуждение:
The Emperor : Downfall of an Autocrat