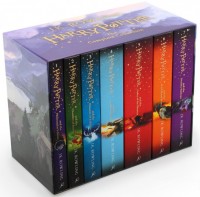 Feast your eyes on this beautiful boxed set containing all seven Harry Potter novels in paperback! These new editions of the classic and internationally bestselling, multi-award-winning series feature instantly pick-up-able new jackets by Jonny Duddle, with huge child appeal, to bring Harry Potter to the next generation of readers. It's time to pass the magic on! Loved by fans worldwide, J.K. Rowling 's Harry Potter series has sold over 450 million copies, been translated into 79 languages, and made into 8 blockbuster films. She has written three companion volumes in aid of charity: Quidditch Through the Ages, Fantastic Beasts and Where to Find Them (in aid of Comic Relief) and The Tales of Beedle the Bard (in aid of Lumos), as well as a film script inspired by Fantastic Beasts and Where to Find Them.